If you grew up in the Cedar Rapids area, you have had a kolache or two, or 12.

Here, we know well, the kolache (pronounced ko-LAH-chee) - a soft doughy pastry cradling in its center indent a filling of fruit, poppy seed or cheese.

Some were fortunate to have a mom or grandmother who baked kolaches from scratch.

The rest of us have purchased them by the dozens from bakeries like Sykora's in the Czech Village or lined up for first dibs at those sold on the second weekend each June by the ladies of St. Ludmilla's Church during their annual festival dedicated to the sweet treat.

The kolache, though, has a following - a rising one, in fact - outside of Eastern Iowa as well.

Earlier this month, the New York Times reported on the “new world of the kolache.” Crediting immigrants to the area known as the Texas Czech Belt with bringing the pastry to the American plate, the author of “The kolache: Czech, Texan or All-American? (All Three),” called it “the next-generation doughnut.”

Move over cronut. It's the kolache's turn.

The New York Times article, though, wrote of the new generation of kolaches “laden with satsuma oranges or filled with strawberries and ricotta cheese, and savory versions girded with house-made sausages poached in locally brewed beer.”

What would Baba say about that?

If a recent Kirkwood Continuing Education class called “Grandma's Kolaches” held at NewBo City Market just across the river from the Czech Village is any indication, Eastern Iowans are more interested in tradition than trends.

Lori White of Cedar Rapids and Sally Reck of Marion both brought family recipes they wanted to re-create to the class.

“I hope I can make them as well as my mom did,” Reck said.

Others, like Cedar Rapids sisters Jan Hoekstra and Susan Stevenson, came to the class with the hopes of finding a recipe that reminded them of the kolaches their grandmother made.

Among the nine recipes she brought and the family recipes participants came with, the ingredients varied. Some asked for lard; others used cooked potato or lemon zest. There really is no right or wrong ingredient, she said.

After making the recipes, the class voted on the best.

It wasn't an easy choice.

“Sometimes, too, memories are the most important ingredient.

“You are going to gravitate toward the recipe that tasted most like your grandmother's,” Jensen said.

For example, White remembers her paternal grandmother spending days making kolaches and other Czech treats before every family gathering.

“My favorite thing about kolaches is just the family memories that are part of it,” she said.

Kirkwood culinary instructor Marjorie Jensen shared these tips for making a kolache like grandma used to.

--- Keep your dough as smooth as possible as you pinch off each ball of kolache dough.

--- Using your forefingers, work from the inside out to form a “swimming pool” for the filling.

--- Remove baked kolaches from hot pan as soon as they are taken out of the oven. This will prevent them from drying out.

[naviga:li]2 cups heated milk (use 1 small can evaporated milk as part of amount)[/naviga:li]

[naviga:li]3/4 cups oil, add to milk and cool to lukewarm[/naviga:li]

Beat entire mixture with electric mixer until smooth and bubbly. Let stand 10 minutes. Then add three more cups of flour. Work dough, again, until smooth and bubbly. Let stand until double in size, about 1 hour. Make into rolls the size of walnuts. Place on a baking sheet and let rise. Then dent in the middle and fill with desired filling. Let stand 5 minutes. Bake in a 375 degree oven for 15 minutes or until golden brown.

Note: This recipe was one of two chosen as the favorites by participants at a recent Grandma's Kolaches Kirkwood baking class. 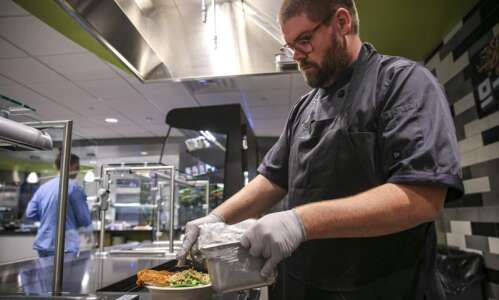